To share your memory on the wall of Helen Tutokey, sign in using one of the following options:

Provide comfort for the family of Helen Tutokey with a meaningful gesture of sympathy.

Helen worked at James Industries, Hollidaysburg for 25 years and upon retirement she received a gold watch with a ruby and diamond. She had also operated with her husband Tutokey Distributors, Smithmill for 35 years.

She was a member of Holy Trinity Catholic Church, Ramey.

Helen enjoyed her grandchildren and great-grandchildren, baking, sewing and flower gardening. She was famous for her lemon meringue pies

Funeral Mass will be held Wednesday April 24, 2019 at 1 P.M. at Holy Trinity Catholic Church, Ramey with Fr. Zab Amar Celebrant. Internment will follow in Holy Trinity Cemetery. Friends will be received at Feller Memorial Home on Wednesday from 10 A.M. until 12 Noon.
Read Less

To send flowers to the family or plant a tree in memory of Helen L. Tutokey (Lashinsky), please visit our Heartfelt Sympathies Store.

We encourage you to share your most beloved memories of Helen here, so that the family and other loved ones can always see it. You can upload cherished photographs, or share your favorite stories, and can even comment on those shared by others.

Posted Apr 22, 2019 at 06:09pm
Joyce, With heartfelt sympathy. May you find joy and comfort in your loving memories. God Bless your precious Mom!

Flowers were purchased for the family of Helen Tutokey. Send Flowers 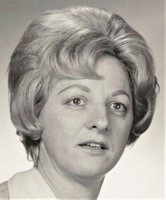