To share your memory on the wall of Harry Johnson, sign in using one of the following options:

Provide comfort for the family of Harry Johnson with a meaningful gesture of sympathy.

He was born March 7, 1930 on the family farm, the second son of the late Oscar and Esta (Fisher) Johnson. He was ... Read More
Harry O. Johnson, 89, of Tipton joined his heavenly family and friends on Thursday December 12, 2019 at Epworth Manor.

Following his Air Force enlistment serving in the Korea, he returned to the family farm. With his late brother, Walter, they raised beef and poultry.

He was a 1948 graduate of Altoona High School. He had served as a forest fire warden, was a member of the Sinking Valley Volunteer Fire Company and was a former Tyrone Twp. Supervisor.

Some of his hobbies included hunting, gardening, fishing and creating his own lures. He was the oldest member of St. Olivet Lutheran Church.

There are many who were richly blessed having known him and his great love for family. Harry O. Johnson was a quiet, humble, hard-working man. God willing there should be more people like him.

Funeral services will be held Monday December 16, 2019 at 11 A.M. at Mt. Olivet Lutheran Church, Altoona with Pastor Sharon Erb officiating. Interment will follow at St. John Lutheran Cemetery, Sinking Valley. Friends will be received at Feller Memorial Home on Sunday from 2 to 4 P.M.

We encourage you to share your most beloved memories of Harry here, so that the family and other loved ones can always see it. You can upload cherished photographs, or share your favorite stories, and can even comment on those shared by others. 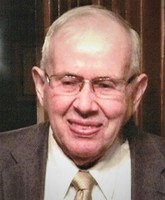